According to the Charity Commission, the regulator for charities in England and Wales, there are over 150,000 registered charities and their annual income totalled more than £61 billion in 2013.

The need for raising money at both the organisational and individual level is self evident, and as the UK becomes increasingly cashless the issue of how charities can adapt to this changing environment is one that charities need to address.

The new generation of mobile credit card readers that let smartphones and tablets take debit and credit cards may at first seem like a solution for businesses, but there have been some ingenious uses by charities, which highlight the future of raising money for charity.

Options today: Compare all card machines for charities in the UK

Fortunately, there have been some high profile and successful initiatives to use the iZettle to help the homeless both in the UK and in Sweden.

Simon Mott, a homeless man in London, attracted considerable media attention by becoming the first person to sell the Big Issue using his iZettle. He identified that the gradual switch to a cashless society was having a direct impact on sales of the magazine and therefore his chances of being able to help himself out of poverty, so iZettle came to his rescue.

This heartwarming real-life story graphically illustrates the practicality and potential of Chip & PIN devices like the iZettle to make a real difference at the grassroots level of society. The Big Issue Foundation now intends to make iZettle devices available to other Big Issue sellers.

The initiative has also been replicated in Sweden with Situation Sthlm, Sweden’s answer to the Big Issue. A successful trial was carried out in October 2013 with five magazine sellers using an iZettle card reader to sell the magazine.

Sweden is arguably even more of a cashless society than the UK, so it seems common sense that the country that invented the iZettle would also use the mobile card reader in this way.

Sweden first to use iZettle in Churches

Sweden is the first country to start using iZettle in churches in place of the collection plate.

The congregation in Romelanda, a small parish near Sweden’s second city of Gothenburg, started collecting payments using iZettle in 2012. Churchgoers also have the option of using the iZettle reader to donate money to the church’s missionary work too. It seems an obvious place to take advantage of the simplicity of the iZettle, although the idea has yet to catch on in any significant way in the UK.

Many potential uses for charities

The iZettle has also been used at a charity fundraising event to great success and again the Chip and PIN reader is ideally suited to this type of event. In 2012, the Moto in the Community Trust used the mobile card reader at a charity event to raise money for the Help for Heroes charity, which supports service personnel wounded in conflicts. 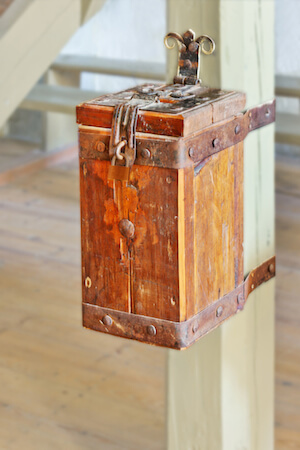 A mobile credit card reader might be more effective.

Given that the iZettle was only launched in the UK in 2012, this event was a flash of inspiration in terms of raising money using this new technology.

Potential not being tapped

The successful examples above highlight the simplicity and ease of using a mobile Chip & PIN reader within a charity context. Unfortunately there seems to be a general lack of awareness still as to how mobile payment solutions like iZettle could be used within the charity sector. It could be that there are still many people who are simply unaware of the emergence and existence of this solution.