Soldo is a spend management account with prepaid debit cards that help small, medium and large businesses manage their finances.

How does it work?
How much does it cost?
How is it managed?

In this review, we look at the features of the account, fees, plans, advantages and disadvantages.

How we rated Soldo

Each criteria gets a score between 1 and 5, resulting in one overall star rating reflecting Soldo’s value for a small business.

A higher product weighting is attributed to the business account’s primary functions: the account features, card, app and expense management.

We have tested Soldo to know its limits and advantages and researched it as a wider service to establish scores for the other rating categories.

Our assessment breakdown is outlined in the verdict of this review, and you can learn more about our rating criteria here.

What is Soldo? How does it work?

Soldo is a non-bank digital account that works in extension of your primary business account. Through a user-friendly admin account and intuitive app, staff and business managers can record and control expenses easily.

The system simplifies the allocation of financial resources where multiple people – like business partners, employees, contractors or temporary collaborators – need to access a budget for business expenses. 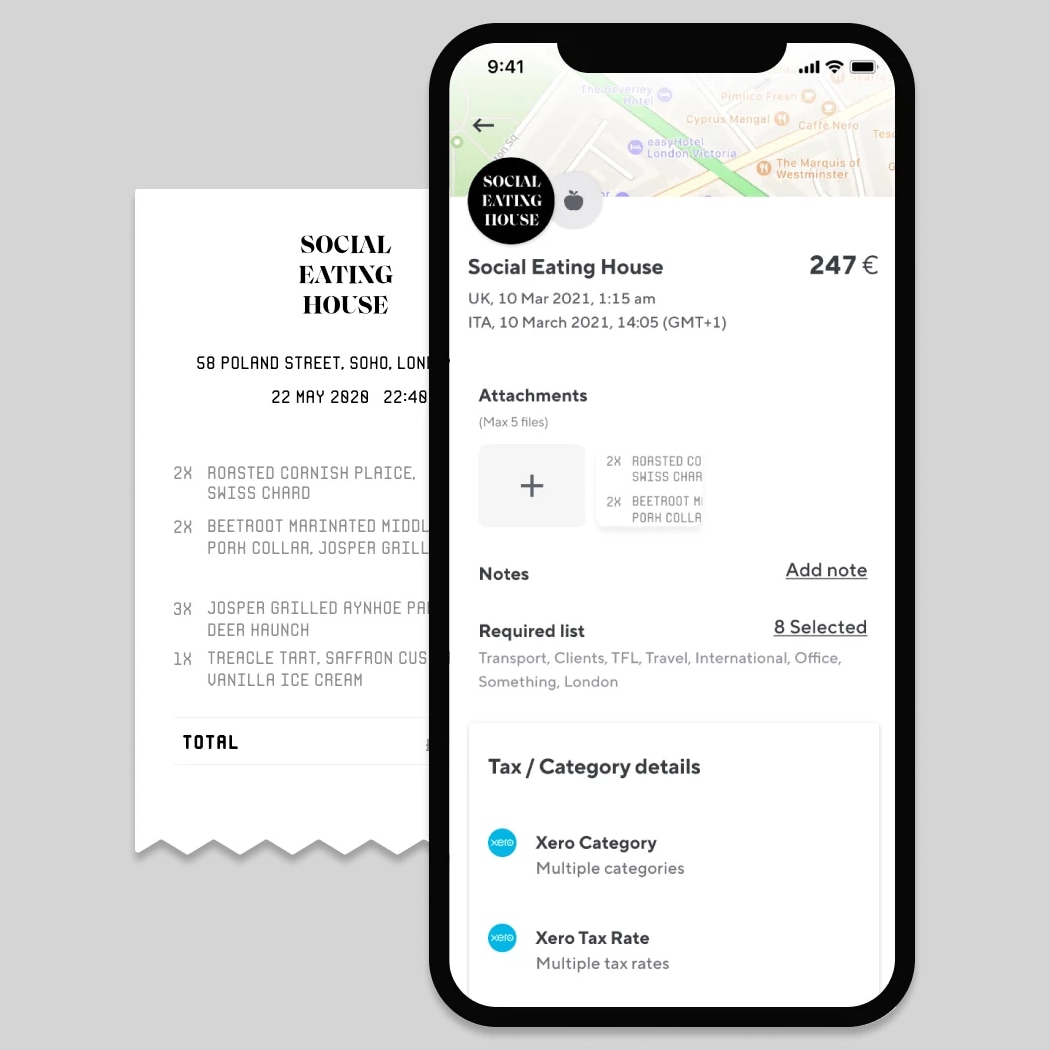 Starting with the Pro plan, you can add photos of receipts.

3 subscription plans are offered, while the most complex companies can request a personalised (Enterprise) plan:

Depending on the chosen plan, it is possible to request a certain number of nominative Mastercard Prepaid cards, assigning them to members, employees or projects (the latter is not nominative). In the next section, we explore the costs and conditions.

For each of the Soldo cards, a budget, rules and spending limits are assigned which can be modified at any time.

The expenses made with company prepaid cards are recorded in real time on the web platform and in the Soldo app that’s available on Android and iOS devices. Cardholders can store the card in their Google Pay or Apple Pay wallets to use for contactless payments, if they don’t have it physically.

See also: What are the best business accounts for companies?

Costs and features of Start, Pro and Premium plans

Soldo offers a selection of plans that can be cancelled any time for free.

Let’s compare the costs, fees and features of the different subscriptions:

*In addition to Mastercard exchange rate.

The Start plan has the fewest features and is therefore more like a taster plan for entrepreneurs, small companies with limited budgeting needs, freelancers and self-employed people with collaborators.

Although Soldo advertises a minimum of 3 users for the Pro and Premium plans, you can upgrade to those for more in-depth features even if you only have one or two users.

Upgrading to Pro gives you the following features:

In addition to the above, a Premium subscription includes:

On the Enterprise plan, you get a dedicated account manager and customer success manager, training and custom onboarding. The price of Enterprise depends on the complexity of your company, so it requires a quotation.

The owner of the company, as an account administrator, has access to a control panel in a web browser. This is where they modify limits and check all card activities in real time.

After topping up the Soldo account by bank transfer from the company’s main business account (the only method currently available), the admin can distribute funds between the prepaid card accounts assigned to employees, collaborators, projects or teams, or to a Wallet. 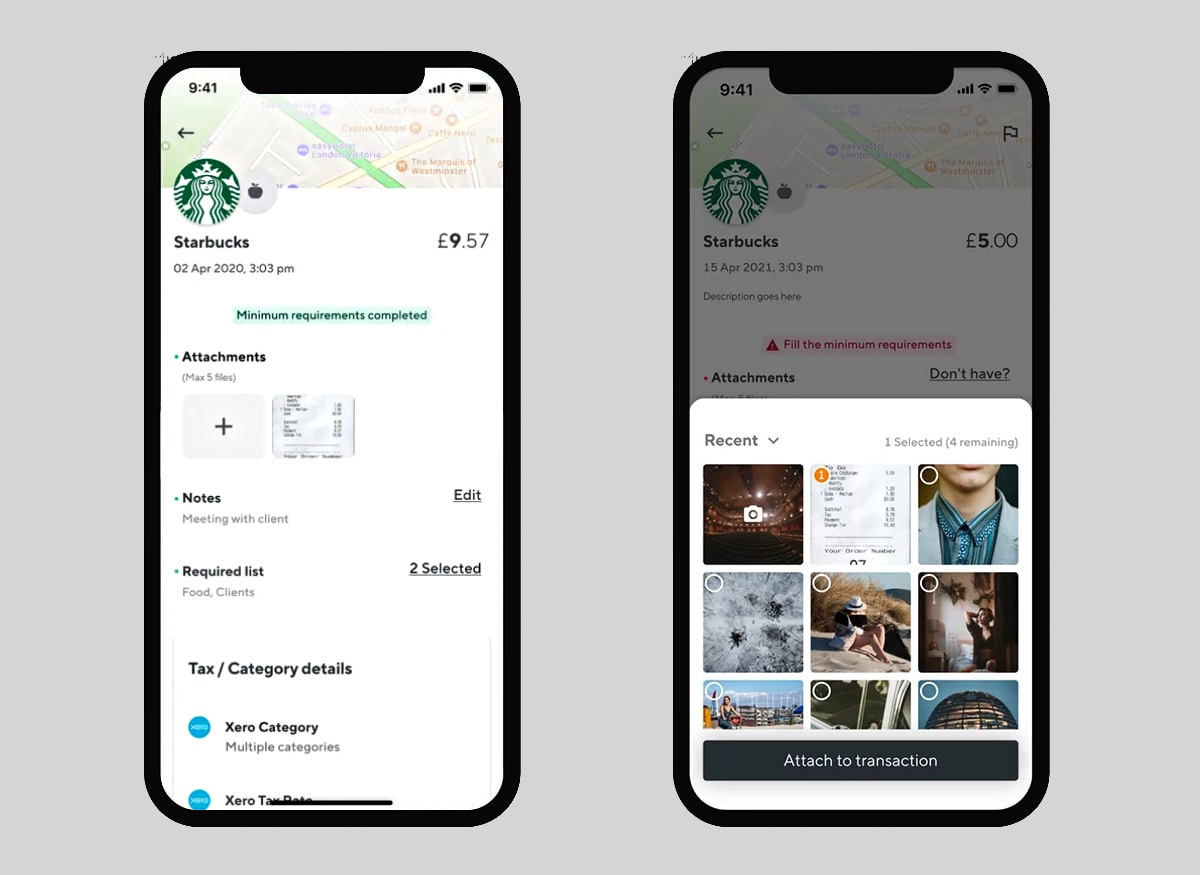 Soldo Pro and Premium allow you to attach photos of each payment receipt.

The Wallets are useful if it’s not possible to estimate or predict the spending needs of a single employee. It works like this: a budget is transferred to an expenditure area (corresponding, for example, to a project or company department) and employees are then assigned so they can access it.

If you have repeated business expenses, you can set up automatic transfers where specific amounts are periodically allocated to certain employees or areas of expenditure, thereby avoiding having to manually distribute the budget. 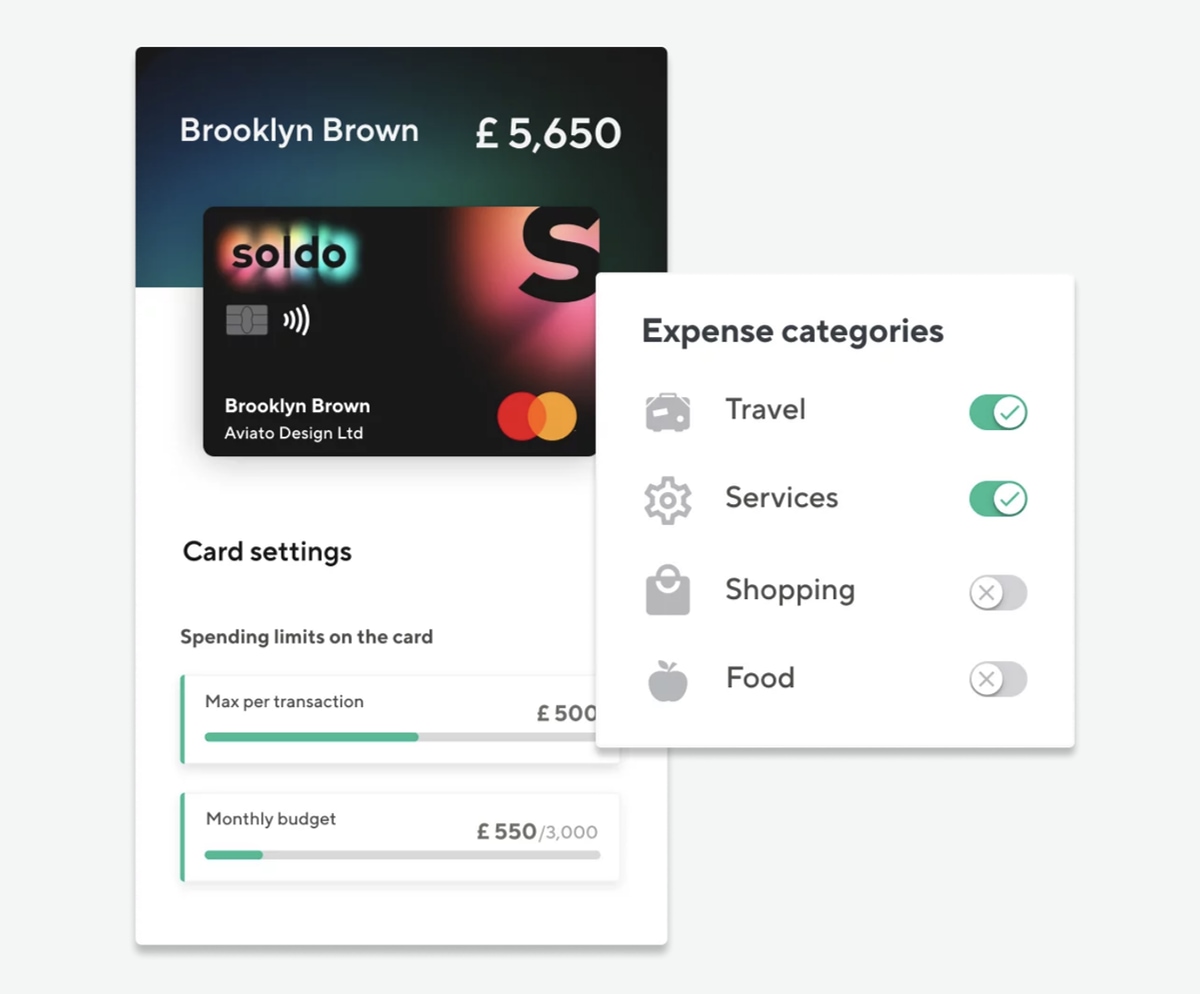 Rules and spend limits are set for each company prepaid card.

Also from the control centre, the business owner can suspend and reactivate one or more cards at any time, limit their expenses or set rules. For example, you can deactivate cash withdrawals, category-based payments and more. These card controls are more advanced than the those included with an average online business account.

On the paid plans, employees can upload an image of an invoice or receipt immediately after a purchase. The Soldo business admin can then verify the document immediately. 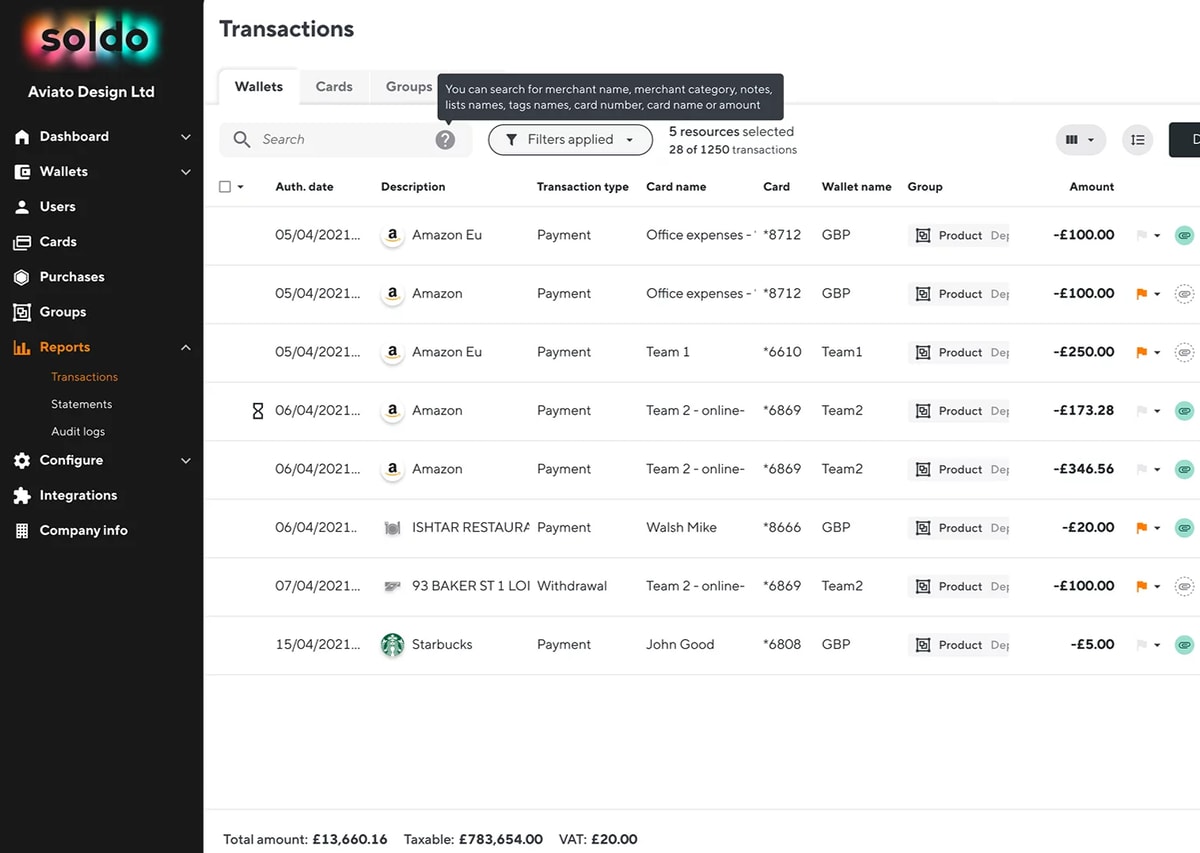 Activities and transactions are registered in real time, so expenses can be monitored remotely.

Reports, statistics and analyses are always available and updated in real time in the mobile app and web dashboard accessible from a computer browser. The data can be viewed as a whole or filtered according to a period, single user, category of expenditure (e.g. transport, meals, fuel), and so on.

All information can then be exported in periodic reports in the most common file formats: XLS, PDF, CSV and QIF.

Reporting facilitates company accounting and tax compliance. In addition to exporting the files, Soldo can be connected to well-known accounting programmes (Xero, QuickBooks, Sage, NetSuite and others).

Soldo offers a company prepaid debit card exclusively for refuelling at petrol stations in the UK and across Europe. It works at self-service pumps only, anywhere that accepts Mastercard. No other types of purchases are enabled.

The fuel card simplifies the management of expenses related to the refuelling of company vehicles, particularly to comply with the latest HMRC regulations. 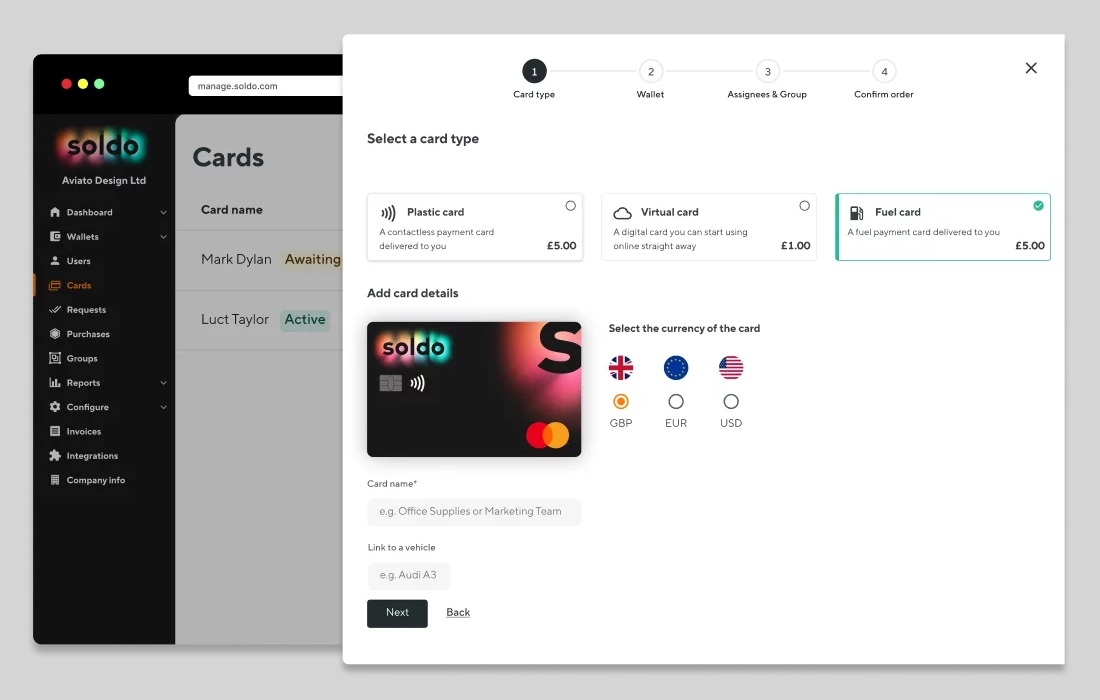 Apart from cards allocated to custom teams and purposes, you can create a dedicated fuel card.

In the control panel, you can download tax-compliant reports for the fuel cards, valid for obtaining expense or VAT deductions.

The fuel card can be linked to a person or vehicle (where the number plate is associated). It costs the same to add as any other expense card on your chosen subscription.

The typical card limits per Soldo prepaid Mastercard are shown below.

The company owner can also disable some features (e.g. withdrawals) on all or certain cards. Alternatively, it can set custom usage limits.

To get started with Soldo, simply fill out the registration form on the official website. Personal and business information will be requested.

The account can also be opened by self-employed freelancers and sole traders. 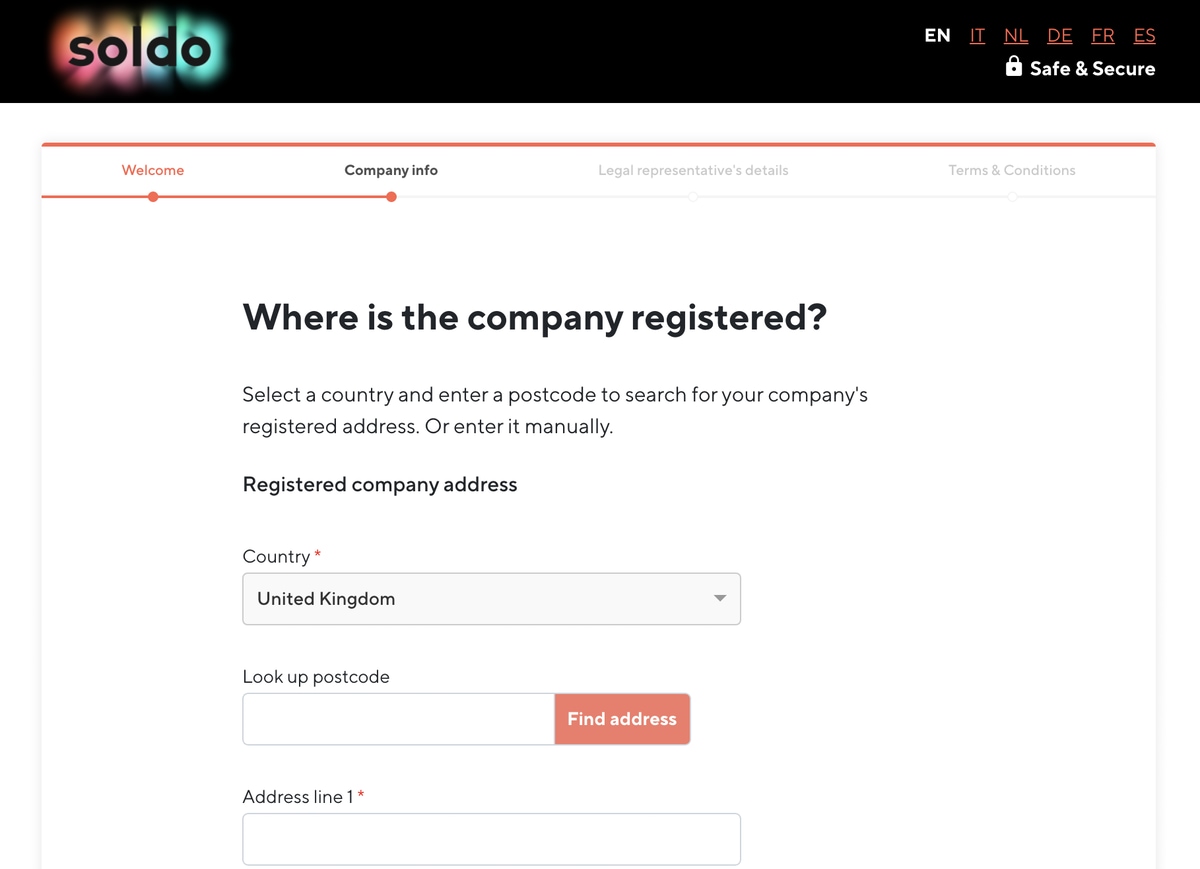 Registration takes only a few minutes.

After completing the online registration form, you have to wait a few working days for the account verification, after which you can access the web portal, top up the Soldo account with funds, request prepaid cards and allocate the company budget.

The cards will be shipped a few working days after the request.

Soldo Financial Services Ltd is based in London and regulated by the Financial Conduct Authority (FCA) who monitors companies in the UK financial sector. As such, it is considered a safe and reliable service.

As a licenced e-money institution, Soldo is not a bank, but instead keeps your money in a ringfenced bank account at select banks, separate from its own finances. Soldo does not publicly state which banks it uses in the UK, which is not great in terms of transparency.

A Customer Care team deals with queries in a live chat on working days between 9am-7pm and Saturdays between 9am-6pm. Email enquiries will be answered after 6-12 business hours.

Users generally have positive opinions on the service, although some report delays or non-delivery of company cards. Mobile Transaction contacted the company for clarification.

The delays would affect only a small percentage of requests. The cards are delivered in 5-7 working days from the order – in some cases, it may take a few more days.

Failure to deliver would instead be due to:

To avoid inefficiencies and delays, it is therefore advisable to pay attention to this information. In case of non-delivery, following the user’s report, Soldo will send a replacement card at no additional cost.

Although technically an e-money account, Soldo is really an add-on service to your main business account so you don’t have to change bank to get better expense management tools.

Soldo enables business owners to provide employees with prepaid cards linked to an expense system that only the company admin controls. You can assign funds to staff members or spending categories, set usage limits and monitor the movements of each cardholder in real time.

The Soldo expense cards are an easy way to control, manage and distribute company finances among users, employees, collaborators and projects.

For each expense made, employees can instantly upload receipts and invoices, and the business admin can simply send them – together with detailed reporting – to their accountant as an Excel or PDF file.

The costs are reasonable for small businesses and professionals, though since you’re paying a subscription fee per user, the monthly fee can rack up quickly with a large team. The free Start plan gives access to basic, but sufficient, functions for a small business with a limited number of employees.