The term NFC often comes up when talking about smartphones and contactless payments.

What does it mean, how does it work, and how is it different from Bluetooth?

Let’s look at the definition, characteristics, functioning and practical applications of a technology that has become indispensable.

The name gives an idea of ​​the main feature of the technology, namely the ability to transmit information between two devices not far from each other and – above all – without the need for physical contact.

It therefore falls into the category of contactless, which refers to several technologies with small – but significant – differences affecting their range of uses.

The signal is emitted by an antenna: 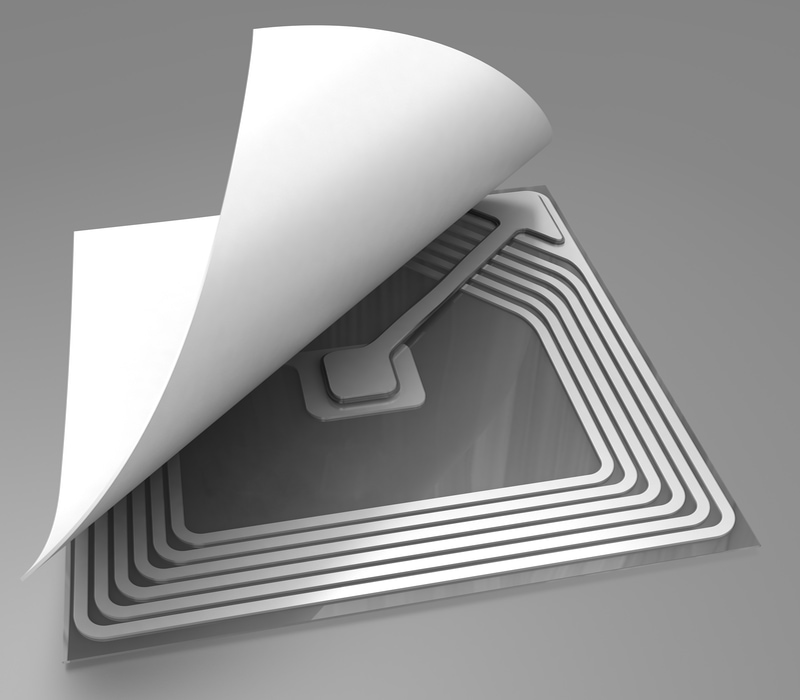 The loop antenna is formed of rings of conductive material connected to an information chip.

In modern devices like smartphones and smart watches, a loop antenna is used to widen the wave propagation area and to achieve greater data transmission efficiency. In fact, a high-intensity electromagnetic field is created inside the conductor rings.

In some devices, the contactless antenna is covered by a layer of material with a high magnetisation capacity, since the presence of a metal body – often used in high-quality devices – can negatively affect the intensity of the electric field.

The transmission of data through NFC requires the presence of two devices equipped with antennas. 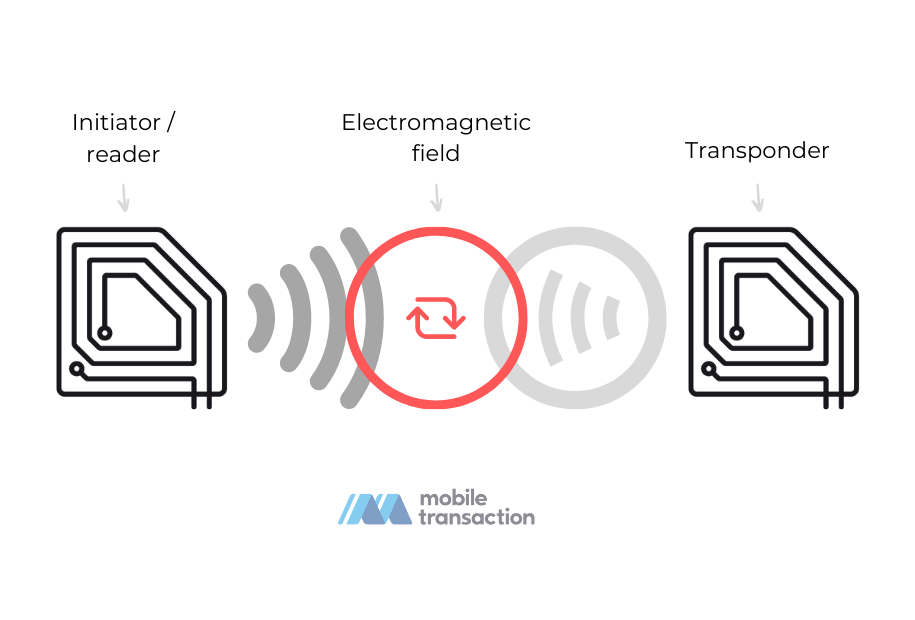 The initiator/reader generates enough energy to read the data transmitted by the so-called passive device (that is, the transponder is not powered). The reader can also become passive if communicating with an active device.

NFC allows the exchange of information through the short-distance propagation of electromagnetic waves.

So what are the practical applications of this technology?

It can be used to:

2. Exchange data with another active device, for example between two phones.

The field of action for NFC is about ten centimetres maximum. For greater distances, it will be necessary to use other technologies: RFID (radio frequency identification) or Bluetooth.

RFID uses additional frequency bands and is not limited to 13.56 MHz like NFC is. This gives it a much larger range of action, between 10 cm and 200 m. NFC is a technology derived from RFID. 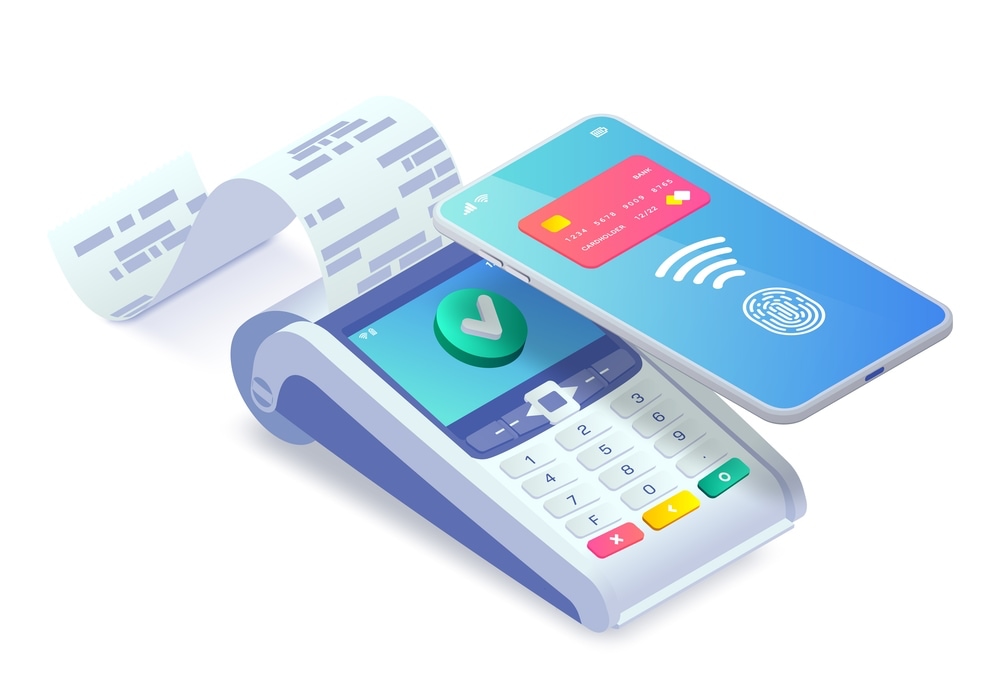 In the payment sector, NFC is used to read information stored on plastic payment cards or in smartphone wallets.

The short-distance transmission capability makes NFC particularly suitable for certain things like contactless payments. The reduced action radius is not only sufficient, but ideal for safety reasons.

In this case, the initiator-reader (with the dual function of sending the signal and reading the returned data) is the payment terminal, while the transponder is the bank card or smartphone in “bank card emulation” mode. This last configuration is encountered when the payment is made with a mobile wallet like Apple Pay.

The positioning of the two devices is very important for communication to be established.

This is why we find the contactless logo on payment terminals: not only to indicate that the device is capable of carrying out this type of transaction (in reality, this is the case with all recent models), but above all to tell the customer where they should position their card or smartphone.

On smartphones, the antenna is positioned in the upper part of the device, which allows it to approach the terminal intuitively without having to turn it around.

The history of NFC begins in the 1980s when Charles Walton filed the patent for RFID technology, on which near-field communication is based.

Payment cards for transport were launched in 1997 in Hong Kong, but they used proprietary RFID technology created by Sony.

In 2002, Franz Atmann and Philippe Maugars filed, for Phillips, the patents that lay the foundation of NFC.

Four years later in 2006, the NFC Forum (made up of Nokia, Philips and Sony) established the specifications for this data exchange standard.

The same year, Finnish company Nokia was the first to implement near-field communication on a mobile phone, the Nokia 6131 model.

It was in 2011, however, that NFC was first used for financial transactions, thanks to the collaboration between Mastercard and BlackBerry.

The following year, Visa also began certifying some devices, including models with the Android operating system.

Difference between NFC and Bluetooth

Near-field communication and Bluetooth (BLE) are both methods of contactless data transmission. The technologies are used on all modern smartphones, but do not operate at the same distance and have the same uses.

The main factor determining the choice between NFC or Bluetooth is the transmission distance.

To exchange photos and videos between two smartphones, or connect with another device (headset, speaker, household appliance), Bluetooth is much more interesting.

With so many potential connections, the risk of interference between unintended devices is significant. How is this problem solved? The Bluetooth standard requires an initial, manual association step (pairing) for two devices to start communicating with each other.

This association step is obviously problematic in the context of contactless payments, which require speed of execution and, above all, the possibility of interacting with any device.

The difficulty is solved by the low-distance communication capacity of NFC, which is 10 cm and works best within 4 cm. At such a small distance, interference from another device has almost no chance of occurring.

NFC therefore allows any device to interact quickly without prior association, while guaranteeing safety through the short reading range.

An additional level of security is applied by the payment software requiring the user’s authorisation via code entry, fingerprint or facial recognition.

Another relevant factor is the data transmission speed which is relatively low (424 kbps) for NFC, but fast enough for the transmission of a few kilobytes of information (card number, cardholder). Such a low speed is not suitable for large amounts of data like continuous streaming of sound, as in the case of wireless headphones.

Lastly, note how NFC and Bluetooth differ on two-way communication. A mobile device using these standards assumes the dual role of receiver and transmitter, while NFC (based on RFID technology) on contactless cards only communicates one way.