Skip to content
Country Analysis    The battle of payments in Denmark: is Dankort losing traction?

The battle of payments in Denmark: is Dankort losing traction?

You wouldn’t think that, in such a small country as Denmark, businesses would have such a hard time deciding what payment methods to accept. After all, there can’t be that many options, right? Wrong.

The Danes are putting the rest of the EU to shame with their frequent use of cards. In fact, they have the second highest annual card spend per person in Europe, only behind Norway (Danmarks Nationalbank, 2019).

The most popular payment card is the beloved national debit card called Dankort, or to be more precise: the combined Visa/Dankort. The duality of this card makes it possible for merchants to choose between two acquiring agreements, and then you have other debit and credit cards and multitudes of mobile wallets to consider. We look at how this is affecting Dankort.

What’s the benefit of a national debit card over the internationally recognised Visa or Mastercard? Dankort is recognised as the most efficient and cheapest payment system in Denmark, incurring the lowest cost for Danish society overall – a point that industry insiders love to make. Its transaction fees are regulated by the government, which is unique compared to international card networks that avoid stringent caps on transaction fees. In fact, Danish regulators do not allow Dankort to make a profit at all, banks included.

For decades, it has been the most frequently used payment card among Danes. Out of all the 4.82 million Dankort in circulation (there are 5.75 million people in Denmark), 4.43 million of them are both a Dankort and Visa Debit/Credit card. When you pay in Danish shops, the card terminal automatically chooses the Dankort part (if the shop accepts it, which most do), but consumers can choose to pay by Visa if they ask for it.

If you’re paying in shops and online where Dankort is not accepted, it is the Visa part that is used.

There’s a benefit for the consumer to choosing the Visa part over Dankort: if you dispute the payment or the card was fraudulently used, it is easier to get back the entire transaction amount. Dankort has certain rules and limitations for disputes, which can limit the money you get back.

Given the popularity of Dankort, card machines in Denmark have for many years been referred to as “Dankortterminal” as many of them have only accepted this card. This has been changing in the last five years.

While most shops still have a Dankort agreement, provided solely by the Nordic acquirer Nets, the prevalence of the co-branded Visa/Dankort makes it possible to bypass a Dankort contract without impacting much on sales if you just accept Visa through another agreement.

For the shop, accepting a Visa payment can be more expensive for higher amounts because Visa typically costs the merchant a percentage and fixed fee, so the higher the transaction amount, the higher the fee. Higher-volume shops can negotiate lower fees, so this is not necessarily a problem.

Dankort, on the other hand, can be more expensive for many small payment amounts or irregular sales because it is a subscription charged a fixed amount every three months based on the number of transactions over the past year. If you had no transactions over the last quarter, you still pay an instalment, and if you’re a high-volume shop, you can’t negotiate fees since they are capped by the government.

Physical cards aside, what about mobile wallets? The Danes are tech-savvy, and that shows in payment habits. It’s also where it gets complicated for brick and mortar businesses.

Denmark’s most popular mobile wallet, MobilePay, has 4.1 million users (that’s a whopping 71% of the population). In 2018, MobilePay was used for more than 280 million transactions. Payment cards were used 1.6 billion times by Danes in 2018, though, so digital wallets still account for a small percentage of transactions.

Other apps pervade, like the pocket money app for kids, MyMonii, downloaded by over 150,000 parents and children and accepted in over 25,000 shops. Apple Pay and Google Pay are used by 160,000 of Jyske Bank’s (Denmark’s third largest bank) customers according to the leading Danish financial newspaper Borsen.dk, with total national users still overshadowed by MobilePay.

In a bid to compete with MobilePay, Dankort launched their own mobile wallet in 2017, simply called ‘Dankort app’. While MobilePay processes Visa, Mastercard and Maestro and not Dankort, Dankort app only uses Dankort.

For shops, Dankort app payments fall under the normal Dankort agreement so fees are the same as those from physical cards. MobilePay has a separate contract with transaction fees separate from other acquiring contracts.

MobilePay and Dankort app use Bluetooth (BLE) technology in contrast to Apple Pay and Google Play that use NFC like contactless cards. Since the latter three are not anywhere near as popular as MobilePay, and card machines typically accept NFC by default, it means businesses have to ensure they are set up to accept Bluetooth to really benefit from mobile wallets. This has often meant adding an extra square device to the side of the card terminals that do not work with Bluetooth – more technology, more hassle. 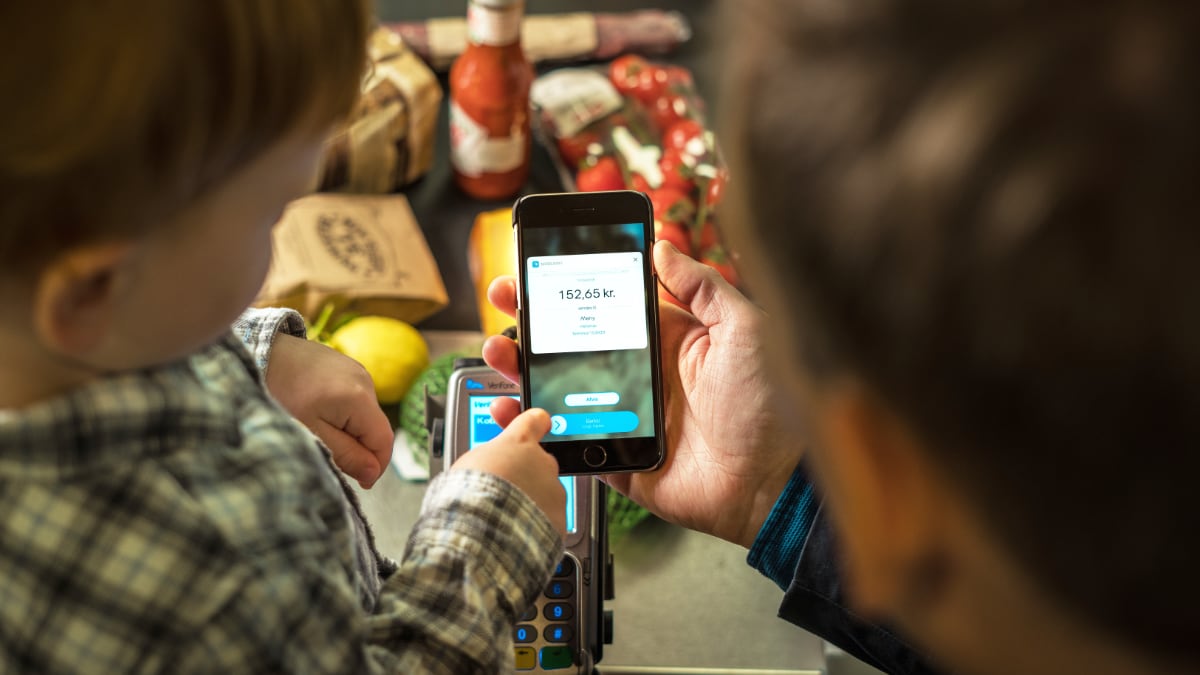 Danes of all ages are comfortable using MobilePay. Photo: MobilePay

International debit cards on the rise

Recently, Jyske Bank decided to discontinue their Visa/Dankort and split it into two separate cards. The idea is that it will make it easier for customers to choose which one to use in Danish terminals that tend to be hardwired to pick Dankort when the combined card is used. This will cause a reduction of Visa/Dankort in circulation and perhaps even Dankort usage, although 84% of surveyed Danes prefer using the combined card. Despite these findings, the fact that Visa can be used outside Denmark and Dankort can’t may mean customers will start using Visa more.

Danish market experts, even government ministers, have criticised this move as benefitting only Jyske Bank who will probably earn more Visa fees as a result of it. It is cheapest for Danish society to process Dankort and most expensive to process international credit cards (although Visa Debit doesn’t cost much more to use than Dankort). The two biggest banks, Danske Bank and Nordea, have chosen to extend their contract for issuing the combined Dankort, to much relief for industry stakeholders.

What about international credit cards? In the first quarter of 2019, 1.76 million credit cards from mainly Mastercard, Visa and Diners Club were in circulation among Danes, down slightly from 2016’s 1.82 million. The stagnant numbers seem to indicate the Danes still prefer debit cards over any other payment methods including credit cards.

Outlook for the future

So is Dankort losing traction in the battle of card payments? The number of Visa/Dankort is still rising, and there will be more pure Dankort issued by Jyske Bank in the near future. However, merchants haven’t got it easy juggling between separate acceptance agreements and technological setups, and consumers are getting more comfortable using international debit cards.

To summarise the challenges for Dankort:

Merchants are getting frustrated at the breadth of payment methods with differing costs and setups.

Dankort app is nowhere near as popular as MobilePay.

Jyske Bank’s decision to split the combined card could mean a drop in Dankort usage within the next couple of years.

While Dankort is still the most popular card, the increasing adoption of Visa and Debit Mastercard could mean more people move away from it.

The threats to Dankort have been dealt with in monopoly wars between the handful of acquirers available in Denmark. Nets, for example, does not accept MobilePay on their Ingenico card machines, but they accept Dankort app (not strange considering they own the brand).

Verifone, on the other hand, has taken an open approach to acceptance, allowing their terminals to accept any payment method and acquiring agreement their merchants want. For example, you don’t need a special Bluetooth box next to the machine to accept MobilePay or Dankort app. Big supermarket chains like Rema 1000, Spar and Bauhaus have switched over to Verifone in the past couple of years because of this openness.

The convenience of a terminal that can accept anything without being locked in to a discriminatory acquiring contract is arguably what most shops want. The question is whether Dankort can keep holding the rest of the payment market at an arm’s length and still be Denmark’s treasured debit card in the face of strong competition.