Small, cash-loving businesses in Italy may finally be ready for card payments

There’s an odd relationship going on between the Italian people, the past and the future.

In a country where entrepreneurs and merchants are still reluctant to accept card payments (and customers to pay by card), what we may call a passion for smartphones could finally soothe this conservative attitude.

An insight into the Italians’ love of tech

As reported in the latest statistics, the smartphone market keeps growing in Italy while the rest of Europe is experiencing a negative trend. Brands like Apple, Samsung and Huawei didn’t even make up for this negative trend with their top-of-the-line devices that usually help boost sales in the darkest of times.

What surprises the most in Italy, though, is the outstanding numbers of digital payments. In 2017, contactless payments went through an exponential growth of 150% compared to the previous year. The amount of payments by card (credit, debit and prepaid) in Italy in 2017 was 220 billion euros, out of which 70 million euros (+60%) were processed by smartphone through Apple Pay and Samsung Pay.

Even if the number of active credit cards has slightly decreased (-2.2%), they have generated a greater amount of digital transactions (+9.8%). Also, so-called prepaid cards maintain a positive trend for adults and young adults alike.

It is no coincidence that one of the most popular prepaid cards in Italy, Hype, developed its product around an app that seems to be more important – in fact, it is – than the card itself.

On the Hype website, you realise at first glance how the application plays a prominent role, while the actual card is nothing but a tool that takes you to it – and sometimes you can even ignore the card by only picking a virtual card.

In the meantime, companies like the German N26 and the British Revolut realised they could not afford to just be witnesses and launched a massive marketing campaign that runs mostly on the web and social media.

Although this looks like a soon-to-be high-tech country, absolute numbers show an inverse truth: compared to the other European nations, Italy proves itself to still be a cash-loving society with a whim for technology (mostly used for lurking on social media).

When it comes to paying with a smartphone, merchants may look at you with suspicion.

The best-case scenario here is: the guy behind the counter (no matter how old he is) will ask you to rephrase your request. Worst-case – still not unusual – scenario: the customer will be compelled to pay in cash because the business doesn’t have a card machine. At the same time, the merchant reaches for his phone to place a bet on a Malta-based website using a prepaid card or a Paysafecard ticket.

In Italy, digital innovation is a lifeline

While progress has been made at a European level, Italy still tries to swim upstream by electing a government that engages in removing any limits to cash transactions – the main aim of which is to contain tax evasion.

By the way, have you read about PSD2? Despite being in force in Italy just like in any other EU country, Italian businesses are not subject to fines for not accepting card payments, even if that is (or should be) mandatory.

In such a context, the only way for Italians to bridge the gap between Rome and Bruxelles, between its past and its future, is to do it voluntarily. And this is where the pronounced Italian whim for technology comes to the rescue.

Digital innovation in the payment industry is a hurricane that Italy wants to reject with a stop sign. That won’t work, because the hurricane has a smartphone in its hands and Italians love smartphones.

Although banks are trying hard to maintain their monopoly on electronic payment methods, still stuck in the past they forgot to keep an eye on mobile technology, leaving the field open to the tech-savvy people who finally have more modern and advantageous solutions.

The same small business that, earlier in the article, rejected our demand to pay by card, is now gushing over the possibility of accepting card payments with the aid of a smartphone. 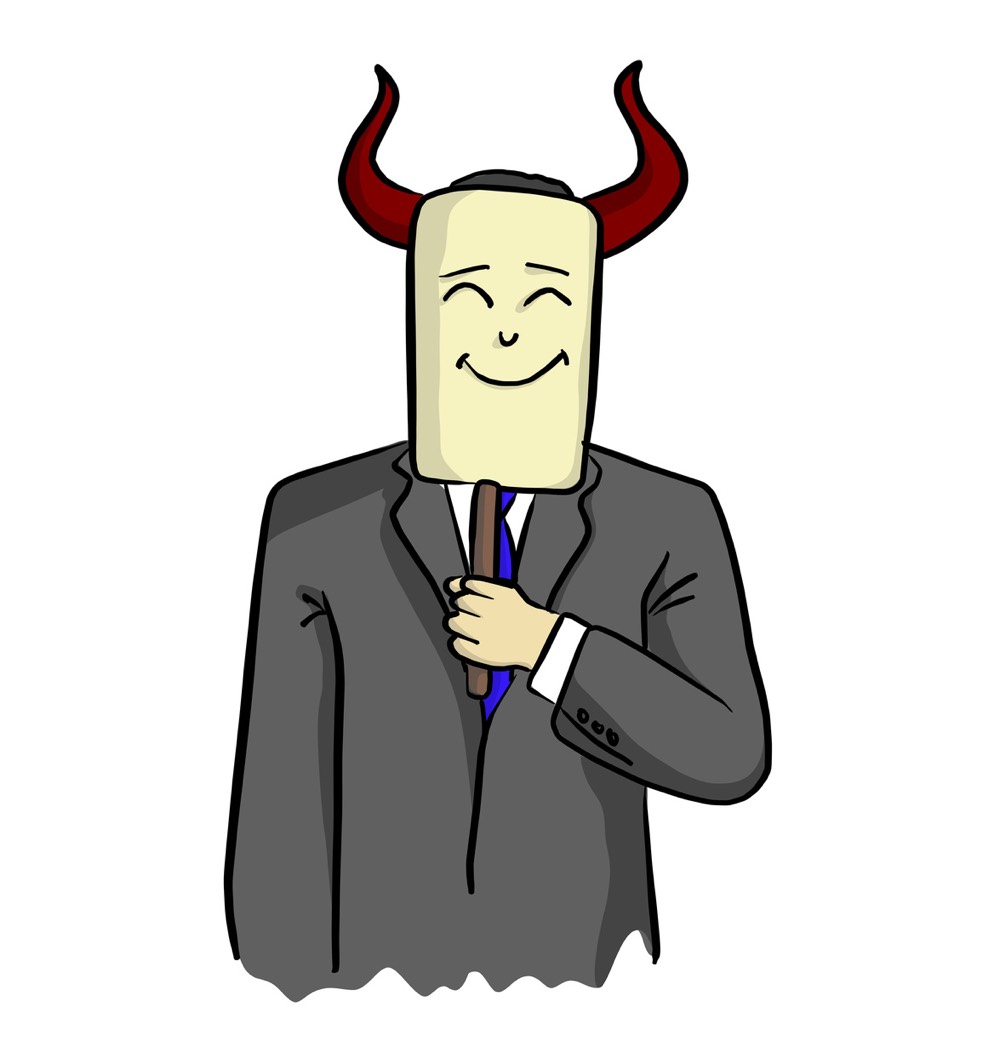 Italian banks are often perceived as greedy, and not acting in the interest of their customers.

Small businesses and the burden of fixed costs

An advantage of mobile card readers is that offers sometimes come with no fixed costs of the type small businesses fear the most.

iZettle and SumUp are among the few companies in Italy letting you buy a card reader at a reasonable price – and won’t compel you to sign an agreement filled with extra clauses that make it look like a marriage.

Founded in London almost a decade ago, SumUp’s solution (more details in our in-depth-review in Italian) attracts small-business owners whose main objective is to fulfil the European and Italian obligations around digital payments. Its fixed transaction fee is higher than the average, yet perfect for those who don’t receive many card payments.

Swedish iZettle, on the other hand, raises the game with a comprehensive solution comprised of a mobile card reader, free point-of-sale app and flexible transaction fee that fits better with businesses with a decent amount of sales coming from cards.

Mobile POS may finally persuade Italian small-business owners, the economic framework of the country, to finally enter the modern world.

These solutions survived from a sort of natural selection that left behind a promising Italian start-up like JUSP, already out of the business despite its diversified plans. 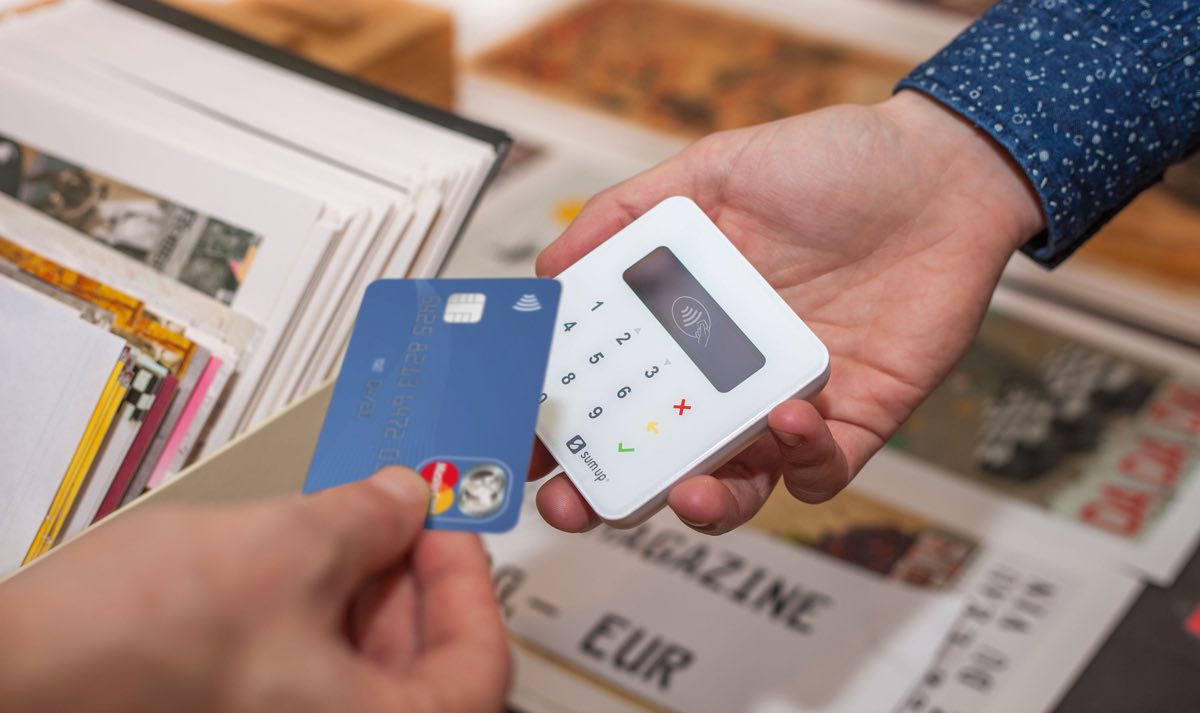 SumUp has made a strong entry in the Italian market. Photo: SumUp.

Speaking of banks, Italy has plenty of them. After all, that’s where the first modern bank in history was born back in 1472. Even though many banks compete in the Italian market, that doesn’t seem to improve costs for clients.

Monthly fees, time constraints and minimum limits of revenue are common themes for acquiring services with a mobile POS. In other cases, the economic conditions are affordable, but the mobile application is poorly suited.

The most popular banks and acquirers offering mobile card reader solutions are Intesa Sanpaolo and UniCredit. Banca Nazionale del Lavoro (BNL), the Italian affiliation of French BNP Paribas group, is among the few that allow clients to purchase a terminal and pay reasonable transaction fees.

Banking institutions show themselves as more competitive when it comes to traditional GPRS terminals. But even in this field, a threat could come from companies – such as myPOS – that offer an acquiring service and a portable card reader with no monthly fixed fee.

In addition, and regardless of the costs, all the traditional banks seem to have an issue with mobile technology.

Lack of updates and poor maintenance are easily fixable problems that banking institutions need to solve in order to compete with these newcomers that are taking over the digital payments market.

The future of fintech in Italy

Despite opposing for a long time to digital innovation, Italy is finally finding its way to take a step forward, maybe two.

Lack of competition is considered the primary cause behind the banks’ short-sighted attitude. For a long time, they have been accustomed to the traditional tools, nurtured by a population that didn’t seem to long for a change.

Being part of a globalised market, though, Italy has slowly come into contact with, and accepted and familiarised itself with, modern solutions from abroad.

As an interest towards mobile technology keeps growing in the country, the Italian market is a rich land that foreign fintech companies wasted no time to sow. Banking institutions should have learned by now that it is no longer a monologue; new players have arrived on the scene.

Relying on the longevity of their current clients is not a smart strategy – in fact, it’s not a strategy at all. If the old banks want to keep the small clients in the near future, they have no choice but to keep up with digital innovation first.