Accepting debit and credit cards in Ireland is a necessity for all businesses in Ireland. Even though some street vendors are still taking cash in hand, you can buy almost anything across the country without a single note in your pocket. This is true even for small amounts, with contactless payments now being the norm for under-€30 transactions.

Despite this, small business are still facing high costs and complicated contracts from merchant services. Fees vary according to annual revenue and business needs, making it hard to predict how much you will be spending over the year on card acceptance. Commonly, you have to pay to set up a card machine, pay for monthly hardware rental or a point-of-sale licence, and there’s often a minimum monthly usage fee involved as well as other costs.

This makes it tempting for start-ups and new entrepreneurs to postpone starting or growing their business, due to the fact that credit and debit card acceptance is a must – but they can’t afford the costs and remain competitive at the same time.

Mobile payment solutions are changing all this across Europe. All you need in order to accept payments is a smartphone and an mPOS terminal. They offer a number of advantages over traditional services, including lower overall costs for some businesses and simpler accounting as well as easier management through mobile apps. As of March 2018, there are still only a few alternatives in Ireland for mobile card transaction services, which we will now introduce.

SumUp: the straightforward solution for small businesses in Ireland

SumUp has been offering its mPOS solution in Ireland since 2012. The beauty of SumUp lies in its simplicity and transparent pricing.

There is no minimum commitment or monthly fee, just a flat fee of 2.75% for all transactions.

To get started, you need to register an account online (get a discount via this link) and buy the mobile terminal (normally €39 excl. VAT) which is compatible with both iOS and Android devices.

As for cards, both debit and credit are supported including Visa, Mastercard, V Pay and Maestro. 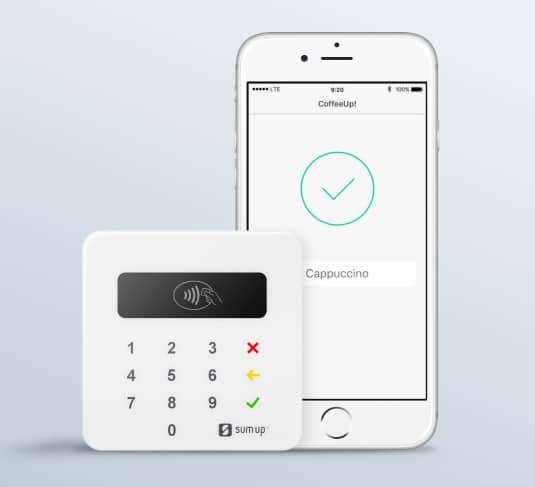 American Express is not currently accepted, but SumUp has previously hinted they wanted to add this. Following a transaction, you receive the money (minus the 2.75% fee) within 2-3 working days.

The card reader takes chip and PIN and contactless card payments as well as Apple Pay and Google Pay, i.e. the most important payment types you’ll need face to face.

All in all, SumUp represents a compelling solution for small businesses in Ireland who are considering introducing card payments or just want to streamline their current operations in the easiest way possible.

The only other mobile app-based card reader currently available in Ireland is Elavon’s MobileMerchant. As with many other big, traditional payment providers, Elavon keeps their pricing and contract details close, so you’ll have to phone them to ask about these.

While mobile card reader competition is increasingly rife in the UK, it’s clear that Ireland is still lacking in options for small businesses.

Notably missing from the Irish equation is iZettle. The Swedish industry leader offers an app-based contactless card reader, which has mostly positive reviews wherever they have launched (total of 12 countries as of March 2018, including the UK). So far, the company has been quiet about its plans for Ireland, but many hope that the Irish launch happens sooner rather than later. iZettle’s CEO Jacob De Geer certainly hopes to expand to more European markets.

PayPal Here and Square Reader are other big contenders yet to enter the Irish market. While PayPal Here has a complicated fee structure in the UK, it still offers a competitive edge in being integrated with online PayPal features. Square Reader leads with their all-free point-of-sale and remote payment features that most small businesses need. Square also has a fixed fee for transactions – and no other fees or minimum contract period – the kind of simple deal that appeals to most start-ups today.

These are exciting times for the international mPOS market. Small businesses in Ireland should review their card payment options to be competitive with similar businesses, not least because consumers choose where to buy based on how they can pay.

43% of Irish consumers have according to a study avoided shops that don’t accept card payments. Similarly, businesses who don’t offer the option to buy online are causing their potential customers to go for their competitors who accept cards online. People are more trusting of card payments overall, while government incentives in Ireland encourage use of card transactions in an effort to reduce cash use even more than the already-minimal usage today.

Now is a better time than ever to consider how you do business. Consumers are no longer afraid of mobile and contactless card payments – in fact, they actively choose it. For that reason, choosing to accept these options is essential for your future success. The real question for you is which payment provider you go for.