Skip to content
Payment Processing    Ingenico vs. Verifone: who will be global leader in the payments market?

Ingenico vs. Verifone: who will be global leader in the payments market?

Together, Ingenico and Verifone process 80% of all card machine payments in the world. As historical pioneers in credit card terminals, they are constantly expanding their offerings to cover the entire payment chain. The companies are very similar and competing fiercely.

With the arrival of new players in Asia and the introduction of smart cards in the US, the payment market is shifting. It is yet to be seen which of the companies will dominate in the future.

The two companies are present in the same sectors: retail, hotels, restaurants, petrol stations and transport. Ingenico is well-established in the French healthcare sector, especially since it manages health cards.

Terminals are the visible part of these companies for the consumer, but this is only one of the branches of Ingenico’s and Verifone’s activities, the other two being transaction management and remote payments.

While their business foci are similar, this cannot be said of their customer base. Let’s see the figures.

Percentage of sales by geographical area (2017)

Precise comparisons are complicated by the different geographical breakdowns. Verifone’s revenues come mainly from North America (34%) and the Europe-Middle East-Africa region (39%). The remainder is split between South America (14%) and Asia (13%).

Ingenico still has a relatively weak presence in North America (10%) and South America (7%) but is well-positioned in Africa and Europe (34%) and Asia-Middle East (22%). These figures provide clues about different growth prospects.

Both companies have been able to expand their business beyond the development of payment terminals, notably through frequent and numerous acquisitions, thus becoming heavyweights in online and mobile payment solutions.

Ingenico accelerated in 2017 when they had four acquisitions, including the Swedish Bambora for €1.5 billion.

As we have seen, Ingenico’s and Verifone’s business areas are divided into three branches: terminals and software, transaction management, and remote payments. However, this traditional representation by product/service groups is no longer in line with industry developments.

Ingenico and Verifone have refocused their offerings to encompass multiple services.

Verifone is now focusing on its Connect platform for merchants and acquirers. Ingenico has taken the same approach with its Axium platform, dividing the offering in two parts for clarity: 1) banks and acquirers, and 2) merchants and online retailers.

The latest-generation smart POS terminals Axium (Ingenico) and Carbon (Verifone) reflect this evolution. The devices are equipped with two touchscreens, one facing the customer and the other facing the salesperson. They are based on Android, so no longer on proprietary systems, which facilitates the addition of third-party software solutions from their “Marketplace”, such as loyalty programs. 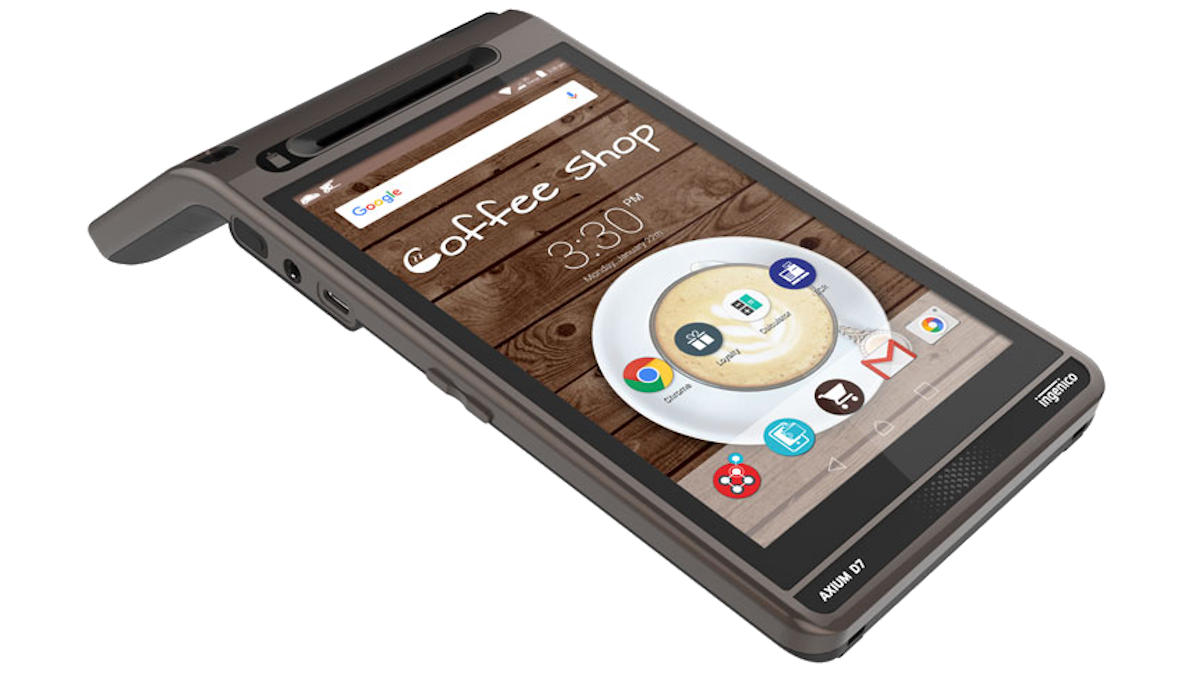 Both companies now have comprehensive offerings, putting them on equal terms – so the competition between them is likely to intensify.

Many markets in the world still to be conquered

As North America generates only 10% of Ingenico’s sales, the French company has theoretically high growth potential despite a recent decline in sales due to regulatory constraints. Widespread use of the EMV system (smart cards) has not benefitted Ingenico as much as expected.

Given its location, South America is an obvious opportunity for Verifone. But Ingenico also has potential, since only 7% of its sales are generated here, and its Brazil sales grew 27% in 2017.

In Asia, it is uncertain whether Verifone will be able to catch up with Ingenico. Verifone grew only 3% there due to the entry of local players like PAX Technology (founded in China), SZZT (Shenzhen, China) and Newland Payment Technology (Fuzhou, China).

It can be speculated that Africa’s proximity to Paris-based Ingenico facilitates this company’s development opportunities on that continent.

The future of Ingenico and Verifone

It’s difficult to make long-term predictions. Phaseout of POS won’t be overnight, and both companies are established in online payments. They don’t have to worry about the global payments market in the immediate future. Cryptocurrency payments are likely to play an important role in emerging countries, as is already the case in Venezuela. As long as there are no regulatory obstacles, Ingenico and Verifone are well-placed to take advantage of cryptocurrency, especially since their transition to Android.

Asian entrants want their share of the global market.

Other European and American competitors that offer less sophisticated alternatives (e.g. Square, SumUp) and Asian competitors are unlikely to want to stay behind.

Verifone was bought by a private equity firm in August 2018, followed by a press release stating their customer service will be improved. The question remains on whether the funding will focus on company growth or return of investment. Since the acquisition, the company is no longer listed on NYSE.

As for Ingenico, there are rumours of an acquisition by Natixis. Ingenico’s share price varies on the Paris Stock Exchange, reflecting concerns about the company’s debt and an expected decline in EBITDA for 2018 despite an increase in sales. The decline in earnings is caused by recent strategic acquisitions, giving reasons to expect for a happy outcome for this French company.

See also: Contactless payments continue to grow in the UK